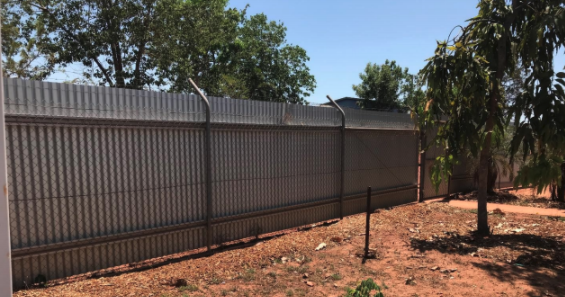 Our latest project has been completed: a wall.

We were approached by One Tree community services who run a domestic violence shelter, the Wadeye Safe House, on the edge of of Wadeye, the largest Aboriginal town in the Northern Territory, about 230km south-west of Darwin. This community is home to over twenty clans, displaced from their traditional homes. It's an area that unfortunately suffers from high rates of family and domestic violence, which needs to be understood in the context of a history of colonisation, dispossession, forced child removal, racism and discrimination and the resulting intergenerational trauma that has arisen from this past.

When escaping family and domestic violence, safety and privacy is paramount. Women and children that enter the Wadeye Safe House are often already heightened by exposure to behaviour that has resulted in physical, sexual or psychological damage. They can be experiencing forced isolation exacerbated by remoteness, and often face severe economic deprivation in a context of persistent housing shortages. The Wadeye Safe House is a refuge in every sense, providing a calm, safe place with access to trained professionals who support individuals and families with basic needs such as food, shelter and sanitation, as well as access to services such as legal and counselling supports.

Workplace health and safety checks identified that the wonderful work done by the team at Wadeye to support these vulnerable women and children was being undermined by the simplest of things...the security and privacy of the Safe House was compromised by a fence in disrepair.

The Sebastian Foundation was thrilled to be able to support the construction of a new fence including secure gates.

Both staff and clients reported to Safe House staff that family and partners could see them in the property which has led to ‘humbug’, ‘shame’, threats and intimidation. There had been instances when women staying at the safe house have been coerced into leaving by perpetrators who come to the fence pleading repentance. Deep social and emotional pressure that this kind of contact and exposure has an impact on the families there, and small children could even break fit through gaps in the old fence.

Hence, the installation of solid fencing has increased the personal safety of the famlies seeking shelter in Wadeye by not allowing perpetrators to come face to face with their clients and has provided a safe and private space for the women and children to rest outdoors knowing their privacy and confidentiality are maintained.

Help us improve the lives of families around the world